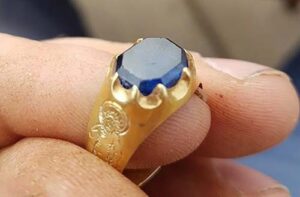 A metal detectorist found a medieval ring worth £ 70,000 in the classic Sherwood Forest in Nottinghamshire. According to legend, the forest must have been Robin Hood’s residence. Robin Hood who took from the rich and gave to the poor.

Mr Mark Thomson was out with his metal detector, and after 20 minutes he got a signal that became the big find of his life. He thought it was a coin that someone had dropped, but got a minor shock when it turned out what he had found. He has only been a detectorist for just over a year but has already been lucky enough to make a real extraordinary find.

“If it turns out that the ring is as valuable as we think, it would completely change my life,” says Mark. “I rent right now, and I would love to buy a house or move to something more comfortable.”

Ring of Gold and Sapphire

The ring is gold and has a blue sapphire. It’s engraved with an infant (Christ) on one side and a female saint on the other. The ring dates back to the 15th century by experts. A similar ring can be seen on images of the Archbishop of Canterbury, William Whittlesey, who died in 1374.

Thomson reported the finding, and through the British system for metal detector discovery, the ring was sent to the British Museum for investigation. Auctioneers who have looked at the ring have concluded that the ring can be worth anywhere from £ 20,000 to £ 70,000.

When the surveys are complete, museums receive an offer to buy the ring and Thomson gets the reward as the finder.

This site uses Akismet to reduce spam. Learn how your comment data is processed.